A Gentle Introduction to How I2P Works

I2P is a project to build, deploy, and maintain a network supporting secure and anonymous communication. People using I2P are in control of the tradeoffs between anonymity, reliability, bandwidth usage, and latency. There is no central point in the network on which pressure can be exerted to compromise the integrity, security, or anonymity of the system. The network supports dynamic reconfiguration in response to various attacks, and has been designed to make use of additional resources as they become available. Of course, all aspects of the network are open and freely available.

Unlike many other anonymizing networks, I2P doesn't try to provide anonymity by hiding the originator of some communication and not the recipient, or the other way around. I2P is designed to allow peers using I2P to communicate with each other anonymously — both sender and recipient are unidentifiable to each other as well as to third parties. For example, today there are both in-I2P web sites (allowing anonymous publishing / hosting) as well as HTTP proxies to the normal web (allowing anonymous web browsing). Having the ability to run servers within I2P is essential, as it is quite likely that any outbound proxies to the normal Internet will be monitored, disabled, or even taken over to attempt more malicious attacks.

The network itself is message oriented - it is essentially a secure and anonymous IP layer, where messages are addressed to cryptographic keys (Destinations) and can be significantly larger than IP packets. Some example uses of the network include "I2P Sites" (webservers hosting normal web applications within I2P), a BitTorrent client ("I2PSnark"), or a distributed data store. With the help of the I2PTunnel application, we are able to stream traditional TCP/IP applications over I2P, such as SSH, IRC, a squid proxy, and even streaming audio. Most people will not use I2P directly, or even need to know they're using it. Instead their view will be of one of the I2P enabled applications, or perhaps as a little controller app to turn on and off various proxies to enable the anonymizing functionality.

An essential part of designing, developing, and testing an anonymizing network is to define the threat model, since there is no such thing as "true" anonymity, just increasingly expensive costs to identify someone. Briefly, I2P's intent is to allow people to communicate in arbitrarily hostile environments by providing good anonymity, mixed in with sufficient cover traffic provided by the activity of people who require less anonymity. This way, some users can avoid detection by a very powerful adversary, while others will try to evade a weaker entity, all on the same network, where each one's messages are essentially indistinguishable from the others.

There are a multitude of reasons why we need a system to support anonymous communication, and everyone has their own personal rationale. There are many other efforts working on finding ways to provide varying degrees of anonymity to people through the Internet, but we could not find any that met our needs or threat model.

The network at a glance is made up of a set of nodes ("routers") with a number of unidirectional inbound and outbound virtual paths ("tunnels", as outlined on the tunnel routing page). Each router is identified by a cryptographic RouterIdentity which is typically long lived. These routers communicate with each other through existing transport mechanisms (TCP, UDP, etc), passing various messages. Client applications have their own cryptographic identifier ("Destination") which enables it to send and receive messages. These clients can connect to any router and authorize the temporary allocation ("lease") of some tunnels that will be used for sending and receiving messages through the network. I2P has its own internal network database (using a modification of the Kademlia algorithm) for distributing routing and contact information securely. 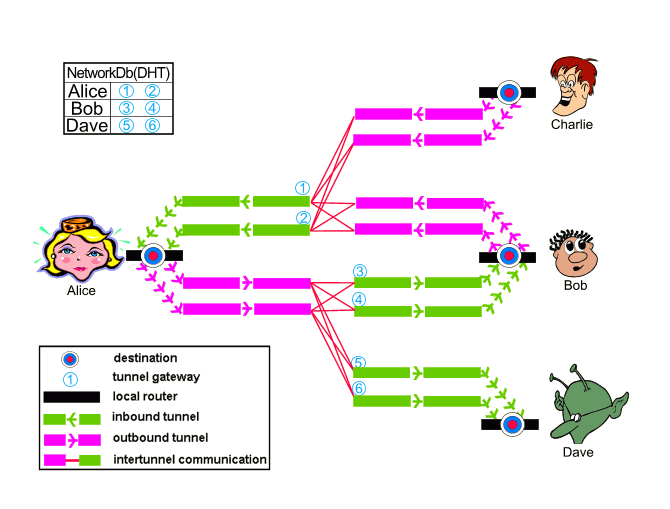 If Bob wants to reply to Alice, he simply goes through the same process - send a message out one of his outbound tunnels targeting one of Alice's inbound tunnels (tunnel 1 or 2). To make things easier, most messages sent between Alice and Bob are garlic wrapped, bundling the sender's own current lease information so that the recipient can reply immediately without having to look in the network database for the current data.

To deal with a wide range of attacks, I2P is fully distributed with no centralized resources - and hence there are no directory servers keeping statistics regarding the performance and reliability of routers within the network. As such, each router must keep and maintain profiles of various routers and is responsible for selecting appropriate peers to meet the anonymity, performance, and reliability needs of the users, as described in the peer selection page.

Content sent over I2P is encrypted through three layers garlic encryption (used to verify the delivery of the message to the recipient), tunnel encryption (all messages passing through a tunnel is encrypted by the tunnel gateway to the tunnel endpoint), and inter router transport layer encryption (e.g. the TCP transport uses AES256 with ephemeral keys).

End-to-end (I2CP) encryption (client application to server application) was disabled in I2P release 0.6; end-to-end (garlic) encryption (I2P client router to I2P server router) from Alice's router "a" to Bob's router "h" remains. Notice the different use of terms! All data from a to h is end-to-end encrypted, but the I2CP connection between the I2P router and the applications is not end-to-end encrypted! A and h are the routers of Alice and Bob, while Alice and Bob in following chart are the applications running atop of I2P. 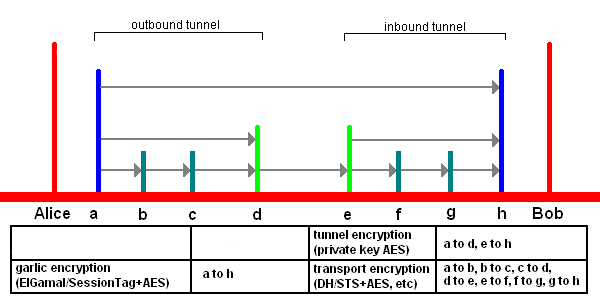 The specific use of these algorithms are outlined elsewhere.

The two main mechanisms for allowing people who need strong anonymity to use the network are explicitly delayed garlic routed messages and more comprehensive tunnels to include support for pooling and mixing messages. These are currently planned for release 3.0, but garlic routed messages with no delays and FIFO tunnels are currently in place. Additionally, the 2.0 release will allow people to set up and operate behind restricted routes (perhaps with trusted peers), as well as the deployment of more flexible and anonymous transports.

Some questions have been raised with regards to the scalability of I2P, and reasonably so. There will certainly be more analysis over time, but peer lookup and integration should be bounded by O(log(N)) due to the network database's algorithm, while end to end messages should be O(1) (scale free), since messages go out K hops through the outbound tunnel and another K hops through the inbound tunnel, with K no longer than 3. The size of the network (N) bears no impact.

I2P initially began in Feb 2003 as a proposed modification to Freenet to allow it to use alternate transports, such as JMS, then grew into its own as an 'anonCommFramework' in April 2003, turning into I2P in July, with code being written in earnest starting in August '03. I2P is currently under development, following the roadmap.

We have a small team spread around several continents, working to advance different aspects of the project. We are very open to other developers who want to get involved and anyone else who would like to contribute in other ways, such as critiques, peer review, testing, writing I2P enabled applications, or documentation. The entire system is open source - the router and most of the SDK are outright public domain with some BSD and Cryptix licensed code, while some applications like I2PTunnel and I2PSnark are GPL. Almost everything is written in Java (1.5+), though some third party applications are being written in Python and other languages. The code works on Sun Java SE and other Java Virtual Machines.

Anyone interested should join us on the IRC channel #i2p-dev (hosted concurrently on irc.freenode.net, irc.postman.i2p, irc.echelon.i2p, irc.dg.i2p and irc.oftc.net). There are currently no scheduled development meetings, however archives are available.

The current source is available in monotone.