Level up your I2P Skills with Encrypted LeaseSets - Blog

It has been said in the past that I2P emphasizes support for Hidden Services, which is true in many ways. However, what this means to users, developers, and hidden service administrators isn't always the same. Encrypted LeaseSets and their use-cases provide a unique, practical window into how I2P makes hidden services more versatile, easier to administer, and how I2P extends on the Hidden Service concept to provide security benefits for potentially interesting use-cases.

Sometimes, you might not want to allow your hidden services to be accessible by anyone, though. Some people use hidden services as a way of accessing an SSH server on a home PC, or to stitch together a network of IOT Devices. In these cases it's not necessary, and may be counter-productive, to make your hidden service accessible to everyone one the I2P Network. This is where "Encrypted LeaseSets" come into play.

I2P Supports several strategies for Encrypted LeaseSets. The key characteristics of each strategy are important to understand when deciding which one to use. If an Encrypted LeaseSet uses a "Pre-Shared Key(PSK)" strategy, then the server will generate a key(or keys) which the server operator then shares with each client. Of course, this exchange must happen out-of-band, possibly via an exchange on IRC for example. This version of Encrypted LeaseSets is sort of like logging into Wi-Fi with a password. Except, what you're logging into is a Hidden Service.

As a general rule, the more complex information a service has access to about your device, the more dangerous it is to expose that service to the Internet or indeed, to a Hidden Service network like I2P. If you want to expose such a service, you need to protect it with something like a password, or, in the case of I2P, a much more thorough and secure option could be an Encrypted LeaseSet.

One such service which is useful to share over I2P, but ONLY with an Encrypted LeaseSet, is the I2P router console itself. Exposing the I2P router console on one machine to I2P with an Encrypted LeaseSet allows another machine with a browser to administer the remote I2P instance. I find this useful for remotely monitoring my regular I2P Services. It could also be used to monitor a server which is used to seed a torrent long-term as a way to access I2PSnark.

For as long as it takes to explain them, setting up an Encrypted LeaseSet is straightforward to configure via the Hidden Services Manager UI.

Start by opening the Hidden Services Manager at http://127.0.0.1:7657/i2ptunnelmgr and scroll to the bottom of the section that says "I2P Hidden Services." Create a new hidden service with the host "127.0.0.1" and the port "7657" with these "Tunnel Cryptography Options" and save the hidden service.

Then, select your new tunnel from the Hidden Services Manager main page. The Tunnel Cryptography Options should now include your first Pre-Shared Key. Copy this down for the next step, along with the Encrypted Base32 Address of your tunnel. 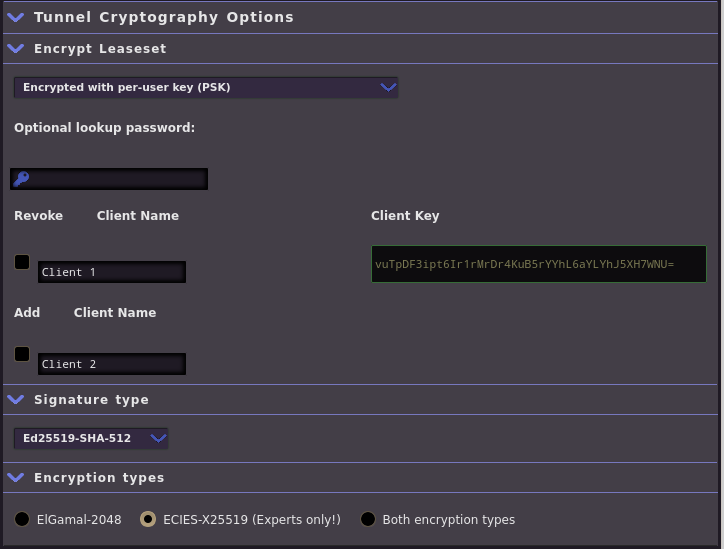 Now switch computers to the client which will connect to the hidden service, and visit the Keyring Configuration at http://127.0.0.1:7657/configkeyring to add the keys from earlier. Start by pasting the Base32 from the Server into the field labeled: "Full destination, name, Base32, or hash." Next, paste the Pre-Shared Key from the server into the "Encryption Key" field. Click save, and you're ready to securely visit the Hidden Service using an Encrypted LeaseSet.

As you can see, I2P offers unique capabilities to Hidden Service Administrators which empower them to securely manage their I2P connections from anywhere in the world. Other Encrypted LeaseSets I keep on the same device for the same reason point to the SSH server, the Portainer instance I user to manage my service containers, and my personal NextCloud instance. With I2P, truly private, always reachable Self-Hosting is an achievable goal, in fact I think it's one of the things we're uniquely suited to, because of Encrypted LeaseSets. With them, I2P could become the key to securing self-hosted home automation or simply become the backbone of a new more private peer-to-peer web.